Kelly, Jan and I went to Lou Malnati’s for lunch. We needed to iron some things out about our communal blog. And, of course, we laughed. A lot. And, of course, ate a lot. (Have you seen Hyperbole and a Half’s artistic rendition of alot?!) Let it be known that I suggested the individual pizzas…

Jamie, my sister, couldn’t come to the lunch. Well, she does live in Arkansas and it’s a land far far away. Plus, she recently (like on Tuesday!) had surgery (she can tell you for what). Now, if she taped any part of it or perhaps brought home a body part in a jar, I’ll be happy to post any of those things!

Several things were decided at the lunch.

If you keep telling people to be funny–whether in front of the camera or in writing–you get called names. Kelly has named me The Blog Nazi. I am taking this as a positive labelling. If you listen closely, you can hear me doing my best Nazi imitation. Is that tasteless?

We came across some boys and one of them was wearing a suspected piece of dirty clothing. Here “dirty” = sexual. I couldn’t care less if his clothes were actually soiled. He’s not my 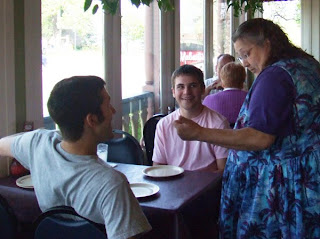 kid. I went to the bathroom and tried to read the t-shirt, but his arms were in the way. I tried to get Kelly to go to the bathroom so she could read it. (Again, Kelly refused to pee on demand for me. I’m re-thinking her best friend status!) Instead, she marched right over to the table and demanded to see the t-shirt. She even shook her finger at him! Just like a good, perturbed mother should!

Of course, I got the picture of the shirt. And I asked him if his mother knew he was wearing it. God, I sounded like June Cleaver. Or Carol Brady! I knew this shag wasn’t a good idea just for that reason! 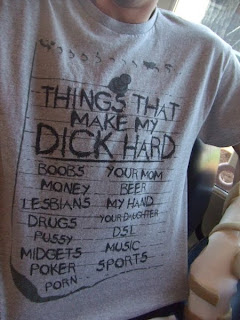 We’re planning on making this a regular meeting. Of course, we need to map out a different location. Two restaurants in ChiBurbia down (i.e., they don’t want us back)…several thousand to go.

Some of you might wonder where the video of me is. I did take one. It was horrific. I look really really bad on camera. So I deleted it. Hey, I’m the who’s a Savvy Minx with the tech stuff (that’s what Jan told me and I have it in writing!), so I can do whatever I want!

Wouldn’t you like to come to a lunch with the Hoots? I’m telling you, we know how to have fun and can deal with the errant youth of America while we’re at it!

And I promise to work on my video skills!

2 thoughts on “Yesterday The Hoots Took Over Lou Malnati’s”

You Can Find Me Here!

Get Promotional Codes For: